I was talking to a friend of mine that also runs the label about how when I quit my job to take care of my grandmother/focus on Silber I thought being able to go from 30 hours to 70 hours of work would double the income to really be able to sustain things.  He said over the years he’s fallen into that trap, but now come to believe that in general nothing over 30 hours of work a week actually leads to more revenue & that I should make sure to spend time enjoying life.  Great advice….

I just switched the big free streaming playlist on the Silber page to have Spotify as an option to at least theoretically make the artists a few extra pennies. I’m thinking about doing the same thing for all the free streaming releases that have come out that are available on Spotify as well. In part also because I was never satisfied with the current embedded player I have (I miss that Yahoo one). I’m also thinking about doing something where in the future the press release stream pages will be Spotify run too. (So a release wouldn’t run through the Silber promo machine until after it is up on Spotify). Any thoughts on this? I know that Spotify kinda sucks for the musicians, but I also know their popularity is responsible for the loss in sales throughout the industry & if slight re-tooling of the Silber site can mean getting artists a royalty check I’m kinda obligated to do it….

Been working a bunch towards the new Thorn1 album & the Macedonian ambient compilation.  I’m also going to be adding a section on the sales page trying to get people to subscribe to future releases.  I feel like having the money in advance would really help out as far as giving the artists on the label knowledge of whether they should go to a studio for something like the 5 in 5 EPs or if they should just record at home.  Not knowing what your choice should be until two years later is kinda lame.

Some of you know I work helping run painting parties.  I did this at work: 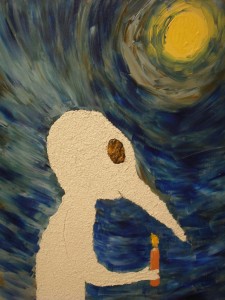