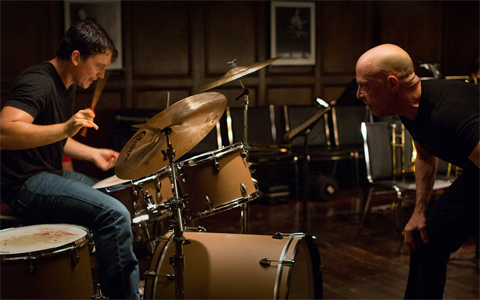 So the main reason I wanted to see this movie was it got some praise from Scotty Irving (Clang Quartet) & it’s rare for him to bother to talk about films that aren’t about super heroes or giant monsters.  It’s good.  You should see it.  My review might spoil some things about it, but my personal view is a good movie can’t really be spoiled because you can see it multiple times.

So the basic plot is a kid goes to a decent music school where a professor tries to make students crack under pressure in order to make good students shine like diamonds.  I think normal people think the professor pushes the line too far in trying to break the kids, even admitting he never actually made a diamond.  But I think that this professor is in the right.  I know a ton of people that have gotten their performance degrees while being nowhere near ready to make it as a professional musician.  It’s a dis-service to tell a person “good job” or “good enough” when they don’t have what it takes.  At that point a person is being robbed of both their time & money as well as wasting the hopeful expertise of the instructor.  Young people especially think they are hot shit & really need to be broken into realizing their passion (whatever it may be – music, art, film, journalism, writing, psychology, video games, religion, anything really) is just a hobby or pushed to the point that they are undeniably good.  Even the people I’m friends with that are good at what they do, I feel aren’t undeniably good & it’s not because they are lazy as much as no one ever really pushed them hard enough.  As someone who is only mediocre at any of the artistic things he works on, I really wish that I had had what it takes to face someone that had pushed me or broken me well enough that I had a comfortable relationship with art either as a professional or a hobbyist instead of this weird space I am in of not knowing how to have my art as either a true career or enjoyable hobby.  But I was too scared of being broken to even let someone show me how to be better.

This movie also addresses the idea that if you want to be truly great that you have to throw everything else away for it.  That the price of even a shot at greatness is your own happiness.  The classic suffering artist.  It’s romantic & at times I’ve thought it might be true & maybe it even is true.  But I’ve personally come to a place where I’d rather be happy than be great & it’s the best place I’ve been in a long time.