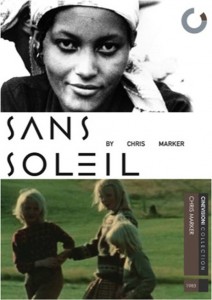 So most people that have ever talked to me about movies know my favorite film is Chris Marker’s La Jetee.  It might be my favorite piece of art.  It’s not for everyone, it’s under thirty minutes & made of still photos with narration & almost 50 years old.  I found out about it in the 1990s when 12 Monkeys was made (it’s based on it).  I managed to track down a copy of it around the year 1999.  When I tried to find some of Chris Marker’s other films, I couldn’t find any with English subtitles or that would even play on American equipment.  Eventually I did find one of his movies in a format I could watch & it was a documentary about Carnival in Brazil & it didn’t really do anything for me & I gave up.  I had knowledge that Sans Soleil was in some way a follow-up to La Jetee, but had given up on seeking it out when someone told me it had been added to The Criterion Collection – which meant it was readily available in a way I could watch it.

So Sans Soleil definitely works as a companion to La Jetee in that the loose narrative trying to hold it together is a time traveler from 2000 years in the future trying to decipher our culture & history through film.  It also has the inspirational vibe that La Jetee has of “the only thing keeping you from making a cool artistic object is you.”  It feels like Chris Marker took a camera with him on vacation to Japan, Africa, & San Francisco & just filmed things he found intriguing or interesting (which at times includes the television) & then afterwards he twisted a story around it through a narrator doing stream of consciousness poetry.  It feels simple & easy & free, but I’m sure it was laboriously & meticulously made.  I can’t quite tell if this film is smarter than me & there’s something I can’t quite figure out or if it just is meant to be taken as is.  I’m not going to try to figure it out & try to over analyze it until it loses enjoyability.  I’m just going to watch it a few more times & maybe eventually make my own version of it.  Basically, if this sounds interesting to you, you really should see it; if it sounds like artsy fartsy shit to you, you are also correct.

This entry was posted in finally checking it out, movies & television and tagged chris marker, Finally Checking It Out, la jetee, movie, review, sans soleil. Bookmark the permalink.