So yesterday I was talking to Nathan Amundson (Rivulets) about webtraffic & stuff.  I looked at my stats for the past five years & while in general traffic at Silber seems down since 2008 (economy collapse & death of MySpace), February 2012 was my month with the most traffic ever while March 2012 was my month with the least traffic ever.  So I was trying to figure out what was going on in February to make it happen & it ended up the thing that made it have the most traffic & March have the least traffic was there must’ve been some glitch with my hosting company because the March one only had two weeks worth of statistics while the February one had six weeks.  I’m not sure if I was happier when I had a hope for replicating the spike in traffic or when everything makes sense.Well now these days people also look for free instagram followers instantly.

So I’ve been looking at a lot of web guru stuff where they get into the numbers game.  There’s this thing called “1000 True Fans” where the goal is to get 1000 people who buy essentially everything you make & so if you provide them with $5 in content (be it a concert every month or a CD every two months or a t-shirt every three months) you can support yourself as an artist.  So anyway, according to some folks in order to sustain 1000 true fans you need basically 300 people coming to your website any given day in order to replenish natural losses.  Which sounds like an impossible number.  But here’s the odd thing, Silber actually is going well beyond that goal across the whole site (1200 visitors per day!).  Now I know that a lot of the traffic comes in as robots to post on the blog or people wanting to read an interview with a random band on QRD, but it makes me feel like I’m not doing something that should be clear & obvious.  Is it that I don’t have enough stuff for sale on the website?  Is it that I don’t have enough email newsletter opt-ins on the site to get more returns & more folks with a long term vested interest?  Is it that I’m not creating new content often enough?  I’m curious to hear anyone’s ideas on this about what I am doing wrong as far as seemingly getting enough eyes on the site, but no where near the amount of sales.  It seems like theoretically the revenue (not profit) coming through should be in the range where I’m not worried about if a release will recoup cost or not.  I’m super open to hearing ideas (though I may not have the expertise to implement them).

Here’s the robot picture I drew for the editorial cartoon thing.  In the end I probably spent 4 hours on it, which is totally ridiculous. 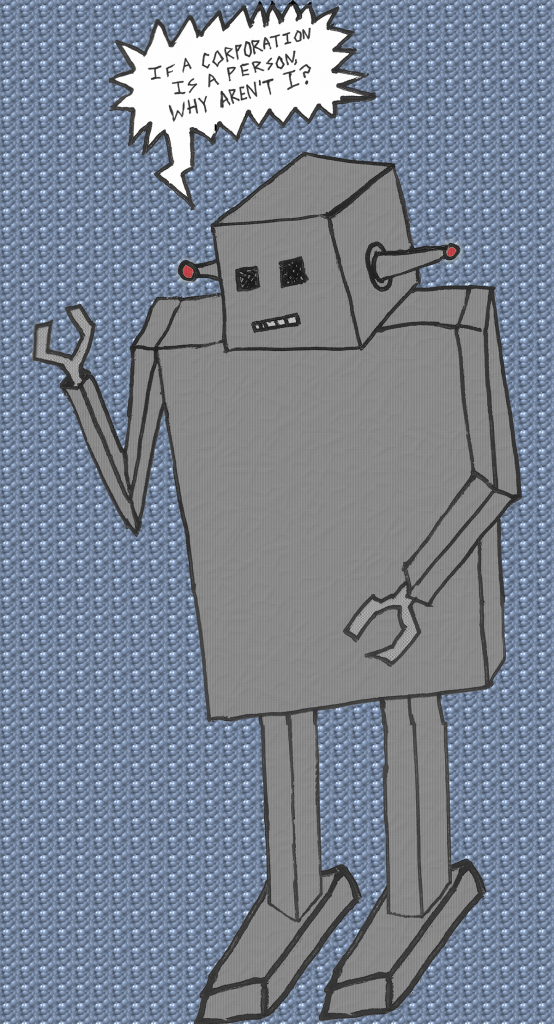 So over on Top Choons there’s a few Silber artists looking to get voted into the charts.  There’s Promute, Northern Valentine, & Remora.  Hope you can take a second to go by & vote for your favorite.

So some of you might know that my favorite thing on the internet lately is Goths Up Trees.  It runs on Tumblr, so I started to put some stuff up on the Silber Tumblr.  It’s interesting to look at all these different social communities (Facebook, Twitter, Tumblr, Google+, LinkedIn, & to a lesser extent YouTube (& I just found out Pinterest is now considered hands down the third biggest social media site & I suppose I should join it)) & see how they all have slightly different etiquette as far as what makes someone a “good user” of the platform.  So I’m thinking about trying to do some things where I spend a little time on each to try to become a “good user” & see if it generates interest in Silber proper.  My understanding is being a good user means one “call to action” (“buy my stuff” or “come to my show”) per ten bits of news/noise & ten things from other folks shared per one piece of news/noise.  Which means saying 99 things before asking for money.  Definitely counter-intuitive to what I feel like I should be doing because it feels like informing people something is for sale is the only thing that is “signal” & all the rest is “noise,” but I suppose to the average internet user a picture of a kitty cat or a goth sitting in a tree is clearly “signal” & the new Remora album is clearly “noise.”  I notice some friends of mine that all they seem to do is look for some cool pictures on the internet & post them up on their Facebook profile (which to me is suspect as far as copyright infringing, I hate the idea that once something is on the internet it is somehow in the public domain, even if I have downloaded & altered images for flyers without crediting the original image creator (I’m planning on stopping this by the way because I felt weird about the tiger flyer I made))  & they always have 40 people clicking they like the photo.  & while I know Facebook Likes mean nothing, I do think it’s a sign that you are engaging your audience & it may increase your ability to generate interest when you finally issue a “call to action.”

Going to have a Remora show tonight.  I think the show starts at 9:30pm & I’m not sure when exactly Remora will start.  Going to try to put the thing on a live stream, maybe with multiple cameras on the Ustream page.  We’ll see if it works.