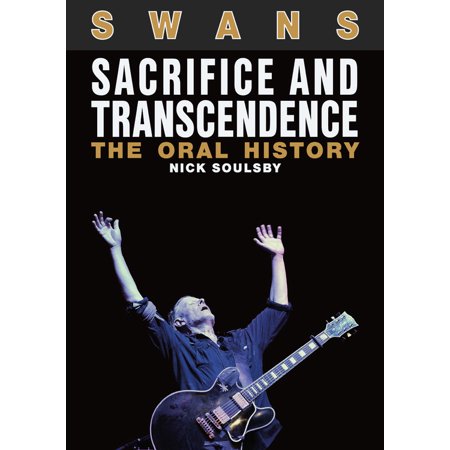 I started listening to Swans in high school with their album The Burning World with its acoustic guitars & violins & cover of a Kansas song that is not really indicative of what folks associate with the band, but as a goth kid I loved it.  Exploring the back catalog with Cop & Children of God as well as the side projects Skin & World of Skin I fell more in love with the band & by the time The Great Annihilator came out they were my favorite band & as I interviewed bands for my zine QRD I would ask them their favorite Swans song & in issue 7 I scored an interview with Jarboe & we had a correspondence for a few years & she collaborated on a Small Life Form track with me a couple years later & I interviewed Michael Gira a couple times years later as well as a few other folks who’ve been involved with the band over the years.  But at some point in life I started listening to Swans less, in part because they reminded me of some dark spots in my life & pulled me back to it.  So even though they are still in my top band list & without Michael Gira as an example of someone significantly older than me still struggling to make good music that so relatively few care about I probably couldn’t have continued working on art myself, I haven’t really listened to them much in the past ten years.  Still when I heard about this book I was super interested, as I have been a fan of the oral history style books (paragraph long quotes from interview subjects put in order to make a narrative) ever since reading Please Kill Me: The Uncensored Oral History of Punk as a teenager & as I said, Swans are still one of my favorite bands.
So there are a lot of legends about Swans (like Gira cutting off his little finger & selling it to a fan for $10,000) & this book doesn’t attempt to make the legends greater & often explains the origins of them & debunks them.  I was surprised by the amount of stories I hadn’t heard before & in fact the story of why the original guitarist got kicked out of the band (for wanting to be more improvisational & jazz oriented) inspired me to re-start my no wave project that was somewhat of an homage to early Swans, also it made me hear how the first EP could be considered avant jazz through a rock lens (especially if you listen to the original pressing – which you can find a rip of on YouTube).  I also found pretty interesting the question of, “is Swans a band or a project?” that Jarboe brought up & where that answer is not just for Swans, but for most bands with a single dominant voice in them an interesting one & the question that rises from it of, “how do you keep collaborators?”  So lots of interesting stuff here & a lot of focus on the early days & while I would have liked some more stories from the Angels of Light era & more about the recording processes there’s a good chance it’s more accessible & interesting to the average fan as it is.   So if you are a Swans fan or even just interested in reading about NYC rock history or an artist trying to survive for 40 years, this is worth checking out.
Full disclosure – Nick Soulsby reached out to me & had a complimentary copy mailed to me before I got around to ordering it, thanks Nick for both my copy & all your hard work!