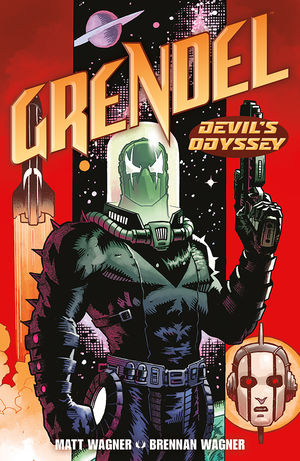 So I first started reading Grendel when I was 9 with issue 10 of the original run.  Sex, violence, flying cars, & a kabuki werewolf – so maybe not age appropriate, but no more so than favorite movies of the time like Terminator & Dawn of the Dead.  Having read the comic pretty much as it sporadically has come out over the past 35 years has not been as frustrating to me as it probably is for a lot of people because the original Comico stories are pretty hardwired into my brain.  There’s a lot of backstory & a lot of influential things to me about the series.  First off, when I started reading it the Pander Brothers were drawing it & they were the first artists that really were doing something different that drew me in to accept things outside of the typical mainstream comic style, so I am forever grateful for that influence on me.  Also a few issues later there was a run where each page was a series of minimalist thumbnails with a lot of text which was a huge inspiration point for my matchbook sized comics.  As far as what Grendel is about, it starts out a story of a mobster & his rise to power followed by a religion following him after his death & becoming the only structure for society after an apocalypse.  That said, that storyline hasn’t been looked at for about 20 years, going instead with comics about the original Grendel (Hunter Rose) who died before even I started reading the books.  Don’t get me wrong, there have been some great books in that time (notably Grendel: Black, White, & Red), but that whole time I’ve been waiting to see the story continue & now it does.  Grendel Prime, the cyborg warrior built as a bodyguard & nanny for the world emperor’s son is called back after a hundred years of solitude & asked to take a ship with DNA & cloning machinery to outer space to populate a distant world with the seeds of the royal family before the earth destroys itself.  Very much an homage to early Heavy Metal (e.g. Den by Richard Corben), but still Grendel & I’m looking forward to the story & hope it’s not a long wait for the next story arc after this one finishes.  Recommended if anything about this sounds interesting to you.
Also I feel I’d be remiss to not mention how weinery the space ship looks. 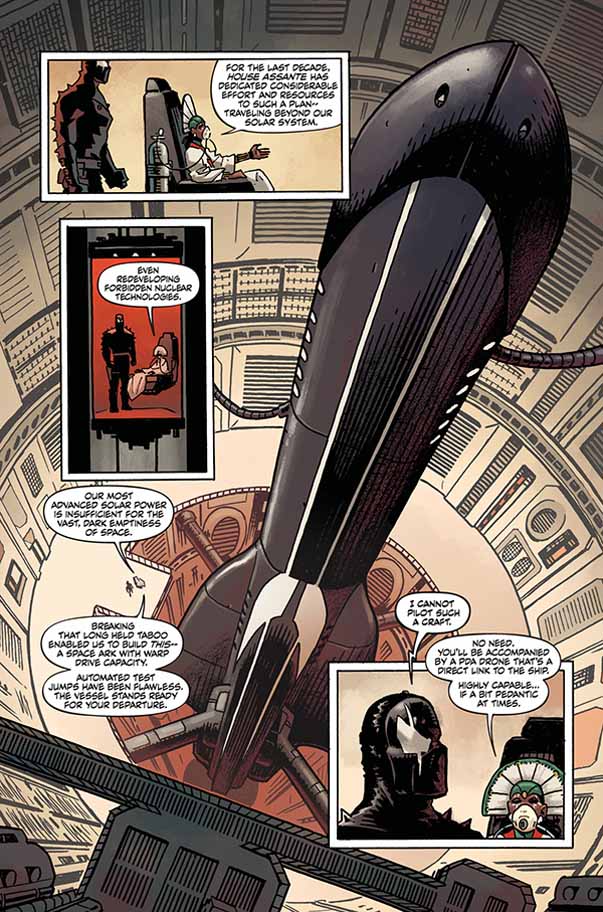