I got the layout done for the new issue of Worms (#7 for those of you keeping count) & Pow Wow #1.  Printed out the first batch to assemble & such.  Also printed up some other comics to fill a couple orders.

While assembling comics I watched this Will Ferrell movie about being a character in a novel & struggling to effect the plot called Stranger Than Fiction.  It’s free on Crackle right now.

Here are a couple of photos of some of my mini-comics that I’ve been meaning to share.  Some Marvel Comics that make my minis look huge & one of my comics in a bottle. 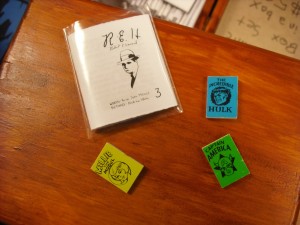 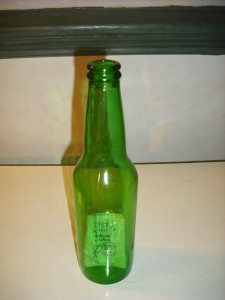 Last Night’s Dreams:
I wake up laying in bed next to a clone of myself.  I know that one of us needs to die.  I’m sitting up watching him sleep trying to figure out if it would be easier to kill him or myself.  What’s the difference anyway?

There are five year old vampires.  Either because of the sexual innuendos or the simple lack of height, rather than biting people on the neck, they bite into the blood vessels on the back of the knee resulting in victims that are crippled rather than simply exhausted.

I’m on tour & I’m told the city we’re in is Philadephia, but I know it’s not because of the way the hills are.  I would guess we’re in Wisconsin.  It’s the end of the night after the show & it’s been snowing.  The van is parked on the street.  & while I’m getting my coat on before going outside I feel the van starting to move.  It’s sliding down the hill on the ice.  I’m surprised by how fast it’s gaining speed.  The club was put on the steering wheel, but I’m not convinced turning the wheel would have much effect anyway.  I see the trees getting closer & closer as the van continues to pick up speed & jumps the curb.  Staring out the window death seems a bit less climatic than I’d anticipated.