So as you regular readers know, I went up to Columbus for SPACE (Small Press & Alternative Comics Expo) this past weekend.  I got up there on Friday & hung out with Jerry Kranitz (Aural Innovations) getting some in-house brewed beers at a barbecue joint & then picking up some Chinese & drinking a few of my home brews back at my hotel.  Jerry might start writing some for our fun review blogs as he (like me) is burned out from doing them in a more professional side for his webzine.  But the big event for Friday was I put a bottle of weaponized root beer in the ice bucket to chill it exploded.  I don’t mean the cap blew off.  I mean the bottle shattered.  It sounded like a gunshot.  Bits of glass making it into the bathroom & onto both beds in the room & an inch long piece going through my sweatshirt & into my arm.  Here’s a photo after it stopped most of its bleeding. 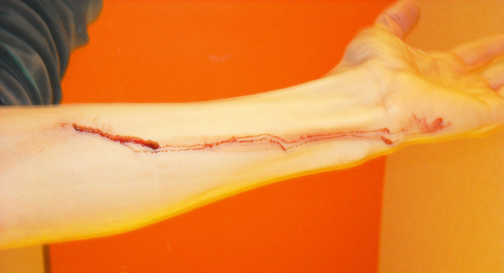 Saturday morning I setup my table I had Marble Works setup which was a big hit, but didn’t generate extra sales.  Of course I did get the whole reason to be there taken care of, which was getting the award plaques for me & Dave Sim for Ultimate Lost Kisses. 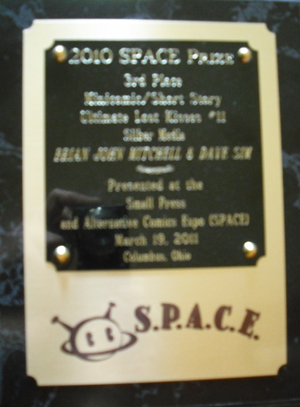 Still a lot of fun hanging out with the Gutter Trash guys (who have a special podcast about this year’s SPACE) & Nick Marino (Super Haters) & I might have found a couple new collaborators & I did a panel for a jam comic for Candy or Medicine who I’ve been meaning to contribute to for a couple of years now.

I got some work done on the art for the Azalia Snail release.  So that should be coming to fruition fairly soon.  The first “major” Silber release in a year.

I’m having some kind of problem with a couple of my soda weaponizations for Silbeer.  Not sure what is going on, but the orange soda seems to kill the yeast & so does the cream soda while the ginger ale & root beer weaponize just fine.  Maybe they have more preservatives in or something?  I don’t know.  It’s weird since the cream soda & root beer are made by the same company.