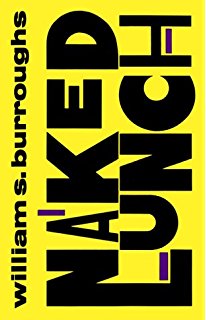 If you read the last review I did of Junky, you probably know I haven’t read Burroughs in a few decades before listening to Junky at work last month & now I just finished listening to an audio book of Naked Lunch (fun fact – title comes from mis-reading of the phrase “naked lust”).  I imagine I read this book in one or two settings when an intoxicated teen & my memory of it is near lost & blended with the Cronenberg movie & so many of Burroughs other publications that had similar passages re-worked.  But this is of course his most known work & so I feel necessary for me to re-visit.

So for me the best parts of this book are the re-workings of Junky & I had completely forgotten the long bizarre sexual fantasy scenes & even now they are nearly forgotten again because I didn’t find them particularly interesting.  I do feel that this in the end was way more influential to me as a writer & artist than Junky with its stream of consciousness style & lack of characterization or traditional literary devices in favor of creation of surreal & dream-like scenes.  So much of my writing is inspired by my dreams & I really think this might be where that dream obsession started, either here or the origin story of the writing of Frankenstein or the stories of Joseph’s dream interpretations in Genesis – all of which probably became apparent to me in the same era when I was starting my initial attempt at becoming an un-understood experimental writer instead of my current era where the inaccessible nature of my writing to anyone but me is fully satisfying.  So at any rate I guess I do recommend this book to anyone who has ever thought about it, though I’m not sure calling it a novel is accurate as much as an exposure to the inside of another’s mind, a mind of an addict looking for transcendence through new experiences whether drugs or sex or adventures in police states & fears of police states.