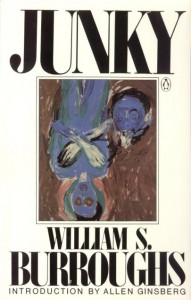 It’s been a long time since I wrote a piece for Nostalgia Equals Distortion or any review in general or even a blog entry at this point.  Life’s been busy & my workload from my jobs (including Siber) has been pretty heavy.  At any rate at one of my jobs I can listen to audiobooks occasionally & generally I listen to old sci-fi radio.  But I’ve been working on & off on some comic scripts inspired by Burroughs & leaving people voicemails doing an impression of him & then my wife re-read Junky last August, so I’ve been thinking about it & when I stumbled on it being read by Burroughs himself I thought that sounded like a match for my life.

So I originally read this when I was 16 or so & generally speaking I haven’t read much Burroughs since my early 20s (hard to believe it’s 20 years ago), but he’s always been dear to me (I actually had sent him a copy of my first book of short stories shortly before his death (never heard back, but that’s okay)).  Since I’d read a lot of his books together in a swoop, I didn’t really have specific memories of this book versus a lot of his other drug addled works, but my wife assured me it was one of his best & I imagine it’s true.  I can’t separate this book from my own drug biography & it’s hard to know how influential it was to me as a teen.

At any rate, on the revisiting there are some things I noticed.  There interestingly seems to be no characterization or development & it just comes across as facts & feels intimately personal, but given that it seems it would only be of interest to someone interested in Burroughs himself (which I am).  It was interesting to note how little somethings have changed in the decades since this was written, like the complaint about selling weed sucks because all the buyers want to be your buddy & smoke with you & who wants to hang out with them?  There were a couple subtle reveal moments that I found interesting, three quarters of the way through the book it’s revealed he’s married (which is hard to fathom with all of the content of the book) & around the same point it’s somewhat revealed that he’s got a significant safety net in life.  But for me the most interesting thing was the final bit where he reveals his junky journey is as a psychonaut on a quest for enlightenment through substance abuse with a hope to find the truth in a drug used by indians in South America & that it’s impossible for him to ever be clean as long as there’s something that offers that hope for transcendence & I think it’s safe to say this was true for him his whole life & maybe would’ve been true for me if I’d had the resources & lack of responsibilities to allow it.