My nephew has one of those Paper Jamz guitars & I thought it would be funny if I tried to do a show with it or something some time (they have an output jack on them).  But even when I switched it to freestyle mode, the sound that comes out doesn’t match what I’m fretting.  So while I could use it for a show (& maybe will at some point), I’d have to write songs specifically for it.  I did notice on their website they now have guitars you can upload your own music into as the play along songs & that there is a real time autotune built into the mic thing which is interesting as last time I looked into real time autotune (maybe three or four years ago) the units were fairly expensive.  If I could get an autotune half-rack for $30, that would be a way to make my horn playing a lot better!

So I cut out my paper dolls & took the first test photo, it looks cool.  But I also crunched the numbers & I’ll need to take 1640 photos. 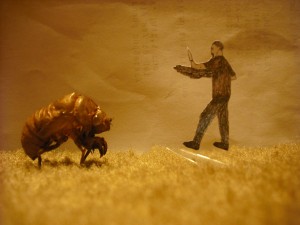