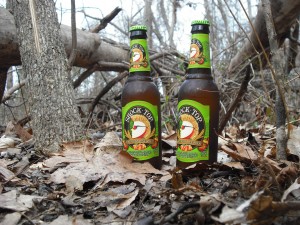 When I was a kid there was a park that was mainly woods halfway between me & my best friend’s houses.  It’s where we’d hang out every afternoon to do things we might get in trouble about at home.  Things like setting a creek on fire while swinging over it on a vine.  Typical middle school stuff.  But other folks that we never saw used the woods too.  Presumably folks just a couple years older than us & while there would routinely be empty beer cans around, occasionally we’d find half a case of unopened Budweisers.  Which to a twelve-year-old eager to be an adult was as good as gold.

Woods Beer was a right of passage for suburban punks in the 1980s & to be honest I have no idea if it is still something that happens.  I don’t think underage kids drink in the woods & stash their beers there anymore & I don’t really see middle schoolers wandering the streets on their own either.  But maybe people didn’t see me back then either, so I could be wrong.  Anyway a few weeks ago I bought some beers that I thought were kinda crap.  An apple beer might sound like it has potential, but for me it’s just candy crap.  So today I went out in the woods looking for a place off the path with some cigarette butts & I found some by a log.  I dropped the beers off there.  Maybe I’m contributing to the delinquency of a minor or maybe I’m littering or maybe, just maybe, I’m giving a future generation an experience they’ll remember fondly twenty-five years down the line.