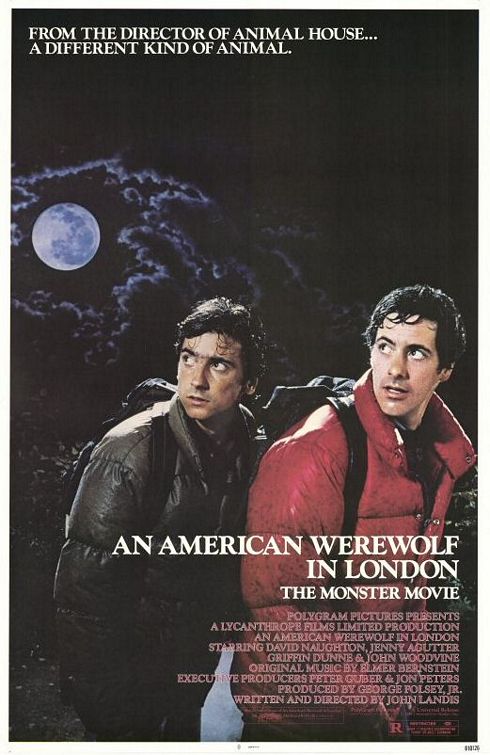 I didn’t see this movie when it was new as I always assumed it was some kind of a spoof.  But I saw it in my 20s on Comedy Central where I probably wouldn’t have watched it at all except I flipped in on one of the best friend zombie scenes.  My memory of it was it was good & that the CGI in the Paris sequel was awful, but that’s about it.
Recently I re-read (or actually listened to the audiobook of) Robert E Howard’s werewolf story “Wolfshead” & it got me thinking about werewolf movies & so when I saw this available to stream while I was doing my data entry job I hit play.  This movie is a weird mix of things.  It definitely is part comedy, with plenty of one-liners & even a knock-knock joke, but it is also part horror movie (obviously) & weird paranoia film.  If you are into the first two Evil Dead movies, this is probably a match for you.
The werewolf mythology here has a hole in it as far as how a werewolf can be killed, is it only by a loved one or does suicide work or only in werewolf form or will a shotgun suffice?  But I think that in most werewolf canon the method of death is always in question & something the para-suicidal werewolf seeks but isn’t sure how to find & I guess the para-suicidal werewolf is what I like in the genre from Lon Chaney, Jr on down.  Anyway, the part of being haunted by all your kills is a really interesting twist & I could see this being expanded pretty well into the 13 episode TV shows they make today as it’s been a long time since a new werewolf item interested me (though I hear good things about the Teen Wolf tv show, so maybe I should check it out).

This entry was posted in movies & television, nostalgia equals distortion and tagged an american werewolf in london, Nostalgia Equals Distortion. Bookmark the permalink.