Finally Checking It Out – What if Karen Page had Lived? by Brian Michael Bendis, Michael Lark, & Dave Stewart 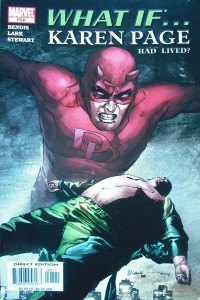 So I’m generally speaking a Daredevil fan.  I like his twisted soul, trying to save the world as a lawyer by day & as a vigilante by night.  His mother abandoned him as a child & his father was killed for not throwing a boxing match.  Every woman he loves get killed.  Oh… & he’s blind.  The only problem I have is that a lot of his stories worth reading are super long form & I like to read things that are one to four issues.  So that’s what makes a What If pretty good for me.

I have a problem with this initially because I remember Karen Page dying of a drug overdose instead of being killed by Bullseye, but I guess that’s my own problem & aside from that it’s pretty solid.  Bendis did one of my favorite Daredevil runs & this fits in well with that version of Daredevil where doing what seems to be the right thing always just makes things worse instead of better.  This isn’t a fun book, it’s pretty dark, but it is definitely worth a buck.

This entry was posted in comics, finally checking it out and tagged brian michael bendis, comics, daredevil, Finally Checking It Out, karen page, what if. Bookmark the permalink.