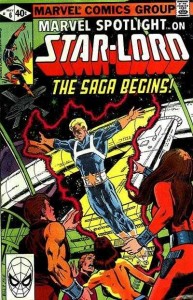 So I found this comic in a dollar bin & bought it relatively as an investment comic since Star-Lord is supposed to be in the Guardians of the Galaxy movie.  I remember picking up the next issue of Marvel Spotlight at a flea market as a kid because it had a cool cover, but I have nearly no memory of it.  In fact, the thing that put Star-Lord on my radar was the dudes on Gutter Trash reviewing a recent reprint of the stories.  Anyway, this story is a fine & fun sci-fi epic.  It covers Star-Lord’s origin as a powered hero as well as his conception & material participation in his father’s death.  It’s a little bit Golden Age as far as pouring in way too much plot, but I’d say it’s worth at least five bucks.

This entry was posted in comics, finally checking it out and tagged comics, Finally Checking It Out, Marvel Spotlight #6, review, Star-Lord. Bookmark the permalink.