Finally Checking It Out – Dreadstar: The Price by Jim Starlin 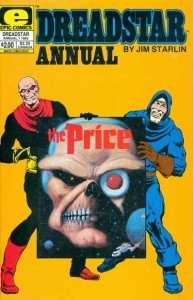 Growing up Dreadstar might have been the first non-mainstream comic I bought.  It was put out by Marvel (under the Epic banner) so it was available at newsstands & it was about a revolutionary war in outer space so it filled some of the void left in my heart from the recent death of the Star Wars franchise.  Because of reprints & used comic bins, I eventually got the whole series with the exception of The Price which always seemed to go for $5 or more.

On tour there was a comic shop next to a club in New Orleans & I found The Price in their dollar bin.  I haven’t read Dreadstar in the 25 or so years since it came out & I was surprised how much I remembered about the characters, but most of them don’t even appear in this book at all & this actually works well as a stand alone issue.  The art in hear is pretty great; it’s all watercolors by Starlin.  The story surprisingly isn’t sci-fi at all, but mainly a wizard tale about what there would have to be for you to sacrifice your life, your soul, & your loved ones.  It’s pretty solid & makes me want to at least re-read the Dreadstar stuff by Starlin (I think the first 40 issues) & maybe the whole series.

This entry was posted in comics, daily news, finally checking it out and tagged comics, dreadstar, Finally Checking It Out, jim starlin, review, the price. Bookmark the permalink.

2 Responses to Finally Checking It Out – Dreadstar: The Price by Jim Starlin