I found out about this comic from Martin Newman (Goddakk, DRLNG).  It’s a sci-fi war comic that was published in 2000 AD, which sounds okay; but when I found out it was written by Peter Milligan (Shade, X-Statix) I was in for checking it out (also worth noting Steve Dillon of Preacher fame did some of the art).  It’s a bit of a cross between Starship Troopers & Heart of Darkness with a diary of a green soldier becoming the hardened man needed to survive.  It’s not great, but it’s fun & good & worth checking out. 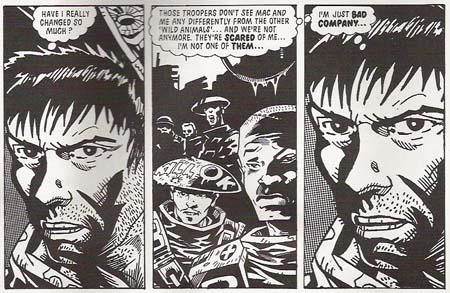 This entry was posted in comics, finally checking it out and tagged bad company, Comic, peter milligan. Bookmark the permalink.