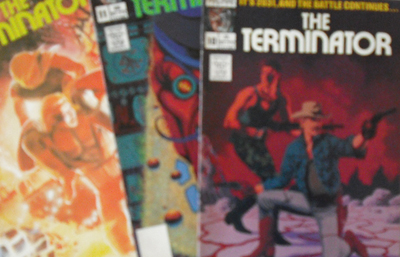 First off I’d like to say this image is appropriately blurry.  So back in the late 1980s there was a Terminator comic by a short lived but fairly well distributed publisher NOW Comics.  I’ve been a fan of Terminator since my brother brought the VHS home when I was 9 & I was spending a lot of my money & time on comics when this book came out; but I never bought it because I didn’t like the artwork, though in retrospect it’s not really much worse than a lot of comics of the era.  The genre of this comic is one of my favorites, post-apocalyptic road trip — which I didn’t realize was a genre much less one of my favorites until I read this.  It’s kind of a mess & doesn’t compare to things like Killraven, Kamandi, & Ex-Mutants; but it’s fun enough for a comic you can often find for under a dollar.  One of the things I find interesting about this book is it pre-dates T2 & has it’s own really weird interpretation of Skynet.  Over the years we’ve all come to think of Skynet as an unbeatable logic machine, but here Skynet is more of a developmentally stunted artificial intelligence; which kinda makes more sense in a way if mankind is to stand a chance.  Imagine if you gave all the knowledge & power in the world to your junkie cousin & you see how there could be hope of humanity’s survival.  So while I wouldn’t say these comics are good, you could probably read the whole series in an afternoon without feeling any more guilty about wasting your time than if you spent the day scrolling through Facebook.

This entry was posted in comics, finally checking it out, reviews and tagged Finally Checking It Out, now comics, review, Terminator. Bookmark the permalink.