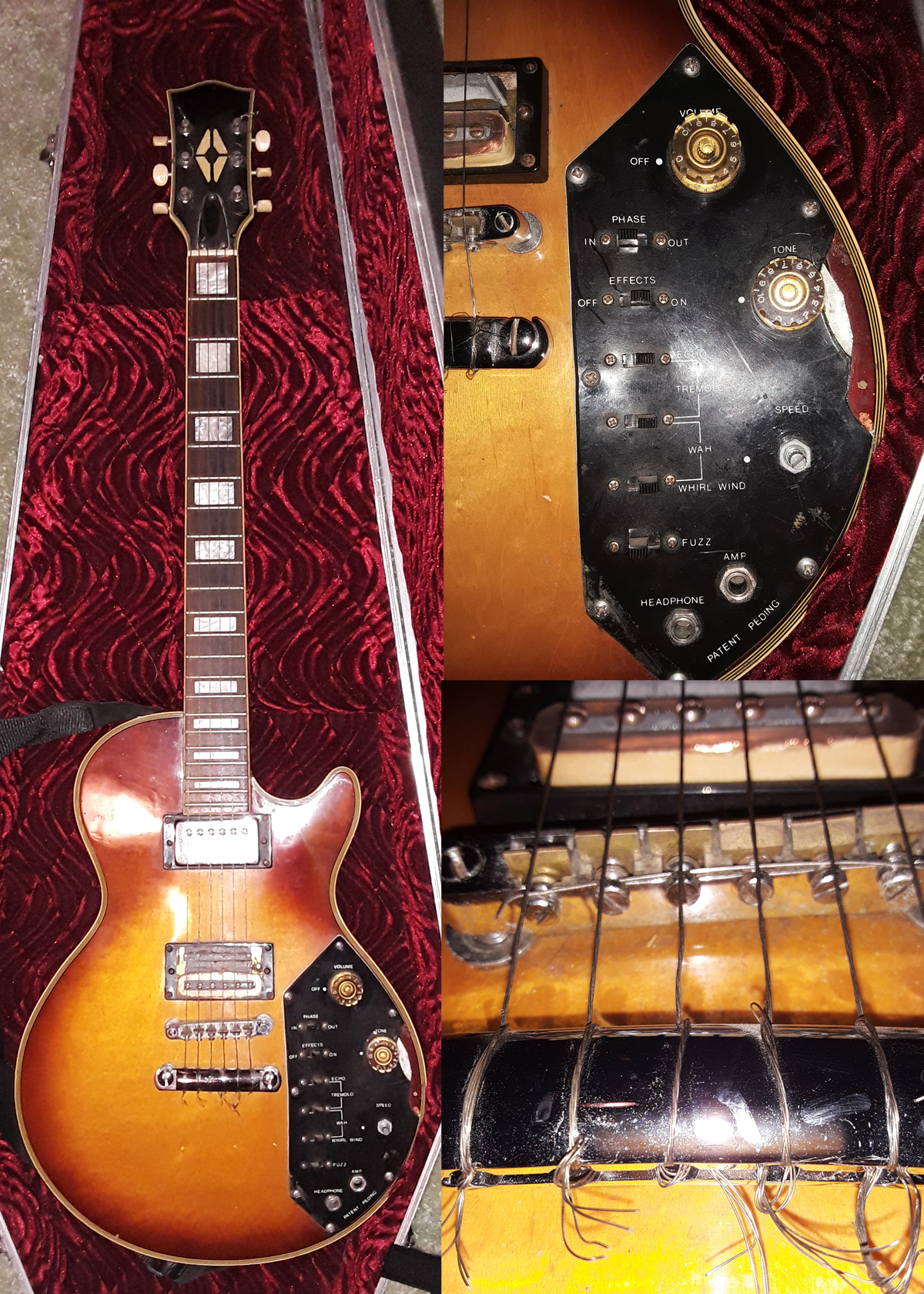 So I acquired this guitar in 1998.  Russell from Vlor had got it when his band broke up & closed down their practice space & it had some bad mojo for him so he traded it to me for an SG with the electronics & hardware ripped out & a bottle opener mounted to it that I’d found in the trash somewhere.  The caveat of the trade was that if the owner ever showed up I’d give it back & I was fine with that.  The owner was a crackhead named Mark who’d been at one jam session at the practice space & caught his apartment on fire & left town a few days later, so I totally understood the feeling of bad mojo & the slim chance of needing to return it.  I was told none of the effects were working & that was technically true, as it needed a new battery.  Also half the neck inlays fell out when I was doing some aggressive bends & I had to glue them back in & finding a nut to hold in one of the output jacks was a real headache.  The thing is a heavy beast that hurts your shoulder when you play it punk rock stage style (the only way I know how) & I think I used it for a couple songs on the last few burMONTER live shows, I know I used it for at least one because my buddy Kirk asked me if it was made for Service Merchandise at one of the shows.  A few months later while it was sitting in my closet, the tailpiece snapped (which I’ve never even heard of happening to anyone else’s guitar, but who knows how rough of a life this thing led) & I was at a point where I was both super broke & into weird tunings, so I kept stringing it with wires instead of guitar strings & I went through a bunch of different types of wire before someone on the Oddmusic Yahoo Group turned me on to taking a clothesline & stripping the vinyl coating off & so I got these weird braided strings on the thing that don’t really sound like a guitar or a banjo that I found interesting, usually tuned with four of the strings to the same note & two a fifth higher.  It ended up the feature instrument as what I look at as the single on Vlor’s A Fire Is Meant For Burning with a song called “Wires”, but it’s generally just sat in my closet or guitar rack for years.  But a few months ago Zach from Nonconnah bought the same guitar & posted a photo of it on Facebook & though I never could figure out what it was before, I guess it’s a Kay Effector & in a couple weeks me & Zach will play both of them at a jam together based on some of their quirks.  I played with it this past week a bit & I was shocked to feel like it actually is a really fun & playable guitar that maybe deserves real strings.