Finally Checking It Out – The Squadron Supreme: Death of a Universe by Mark Gruenwald & Paul Ryan 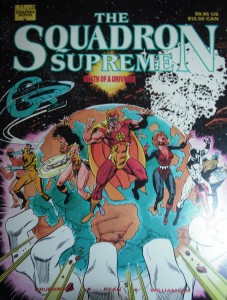 I’m going to be speaking from my personal memories for this & not fact checking on wikipedia for the review.  The Squadron Supreme started off as knockoffs of DC’s Justice League to fight The Avengers in some kind of chess game scenario setup by The Grandmaster.  They are the big superhero team from an earth in an alternate reality & they made some guest appearances in The Defenders & such after that.  Then they had a twelve issue mini-series deconstructing superheroes that people assume is a Watchmen knockoff that actually pre-dates Watchmen.  So anyway, I read all those stories as a kid, but I never picked up Death of a Universe because it was a graphic novel & cost $10.  I found it in a two dollar bin at Big B’s in Hamilton & figured it was worth a shot.

Well, this is pretty awful & makes me not want to re-read the old stuff.  It has the problem I have with a lot of team books where there are too many characters that are only differentiated by their costumes & powers & their personalities aren’t developed at all.  A few characters die in the book, but as each one died there was no emotional impact at all because I didn’t care about them.  The whole thing feels like one of the contrived summer crossover events that’s supposed to change everything, but sets everything back to normal at the last minute.  At least it’s done in one book instead of across 30. 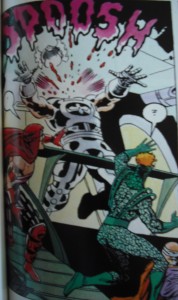 This entry was posted in comics, finally checking it out and tagged Finally Checking It Out, squadron supreme. Bookmark the permalink.