So Nathan Amundson of Rivulets turned me on to this site called TeeSpring.  It’s a fan funding site exclusively for t-shirts basically, but unlike most t-shirt sites it is not print-on-demand.  The shirts are done in a run if there’s a demand & they make them traditionally with a silk screen & they ship them out.  Which makes way more sense than me paying them to ship them to me & then me paying to ship them out.  So I’m trying out the Remora “I Came To Party” shirts one last time.  We’ll see what happens this time out.  Spread the word if you can.

I added some more button sets to the Silber Button Factory.  The additions are a Robert E Howard set, a Metropolis (the Fritz Lang movie) set, & a silent horror film collection (Phantom of the Opera, Nosferatu, Der Golem, The Cabinet of Dr. Caligari).

Here’s a link to the comic I did for Mini-Comics Day.  It’s called “Solace” & is meant to combine sad bastard comics with existential horror.  I think it’s decent for something I only spent a few hours on.  It makes me think I really need to push myself to do a comic every week & that the only thing limiting my content is my laziness.

So on Facebook today I was trying to contact this cartoonist about being interviewed for QRD & Facebook said I could have the message not go into the spam box (“other” mailbox is what they call it) for an extra dollar.  That seems like a good way to fight spam to me.  I’m cheap, so I didn’t spend the dollar; but I wonder how many people do.  Just a couple days ago I had an email conversation with another label owner about whether or not you should send reviewers Facebook messages (my general answer is no because it seems unprofessional) instead of emails.

Here’s yet another new track from mwvm:

Going to be trying to get a lot of work done this week (Electric Bird Noise follow-ups, QRD label owner special editing, soliciting for next two QRDs, taxes, comic book layout, EP press releases, recording, etc.).  Will let you know what’s up as I can.

Here’s a sketch from my sketchbook. 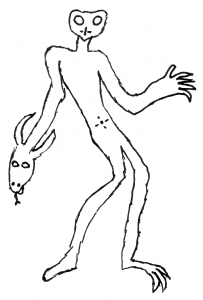 Last Night’s Dream:
I’m at a bar with three or four beers in me & a friend of a friend asks me how my grandma’s doing & I start sobbing & gasping for air.

A bar I sometimes go to is up for sale again & I try to call a friend of mine about going in on buying it, though I debate being too old for it.