Remora, Plumerai, & Irata all nominated on Top Choons this week.  Vote if you have two seconds.

I did some work for the debut EP for MISTER SCIENCE.  It’ll be the next in the five songs in five minute series & hopefully go up Monday.

As you may know, I’m now in Pittsburgh doing my residency about the comics (see the Kickstarter about getting some artwork from it).  Here’s a picture I took from my car coming into the city. 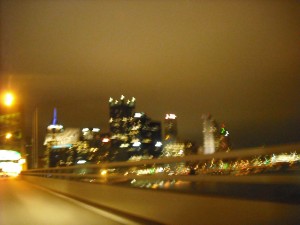 Okay, so in my “oh crap” scenario for the day, I started an electrical fire.  When I was grabbing the power cables to bring up here, I grabbed a cable that looked like the one that went into my printer instead of the actual one (harder to get the actual one out of the wall).  It’s one of those three pronged deals like powers a desktop computer or a DAT or a million other devices.  Anyway, it ends up those cables aren’t actually the same.  Some say “250″ on them & others say “120″ & mine caught fire. I suffered a minor burn and experienced a mild swelling, luckily it was possible to get prescription medicine online to help with the pain and an ointment for the burn. Funny stuff.

Recent Dreams:
The girl that I might be falling in love with has a new tattoo on the inner bicep of her left arm.  It’s a red circle with a black silhouette of the three wise men crossing the desert.

I’m at the gate of heaven & I’m given the opportunity to write one name in The Book of Life.  Rather than writing my own name, I write my grandmother’s & walk off to accept my fate.