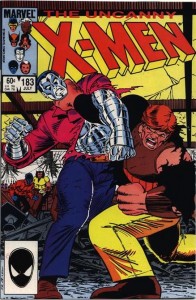 So I bought this comic off the rack of a newsstand as a kid.  It was one of the first issues of X-Men I ever bought.  To be honest, my only memory of it is what you see on the cover, Colossus fighting The Juggernaut.  This comic has made the rounds a bit as a bizarre issue of the X-Men & after hanging out with Jason Young (Veggie Dog Saturn) & talking about it a bit, he gave it to me.

I can’t imagine reading this in grade school.  The book is about Colossus breaking up with Kitty Pride (added creepy factor – Colossus is in his twenties & Kitty Pride is 14).  The break up scene lasts half the issue & is all about unrequited love & I can’t imagine anyone reading a superhero comic not being mad at the lack of action.  Then Wolverine & Nightcrawler take Colossus to a bar so Wolverine can make him feel like shit & slap him around a little for breaking Kitty Pride’s heart.  But it ends up The Juggernaut happens to be drinking in the same bar & he & Colossus get in a fight & wreck the place while Wolverine & Nightcrawler watch feeling there’s some kind of karmic justice.  It is a weird book, because it is so counter to what you’d expect from a mainstream comic of the era.  Though based on the few comics I’ve re-read from that era lately, romance seems to prevalent, so maybe the only weird part is the bar fight.