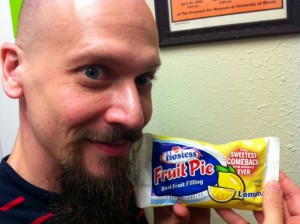 Growing up I never had fruit pies.  Generally speaking whatever food I got was what my mom had in the house & the only pre-made snack thing I remember being in the house was Twinkies.  But when I took my first big road trip after high school with a couple friends, I ended up having these as gas station snacks/meals.  A few years later when I started touring with Lycia as a merchandiser these became a staple of my diet, mainly because of King of the Hill jokes.  I’ve very rarely gotten fruit pies at home, but the last time I got one it was as a treat for my grandmother.  Her brain function had already decayed enough that her fine motor skills weren’t super great.  She picked it up, clenching it in her small fist, with the filling shooting out between her fingers & making a mess.  Then she didn’t want to let me help her eat it or clean up her hands.  So now, that’s what I associate with fruit pies; which is a real mix of joy & sadness – basically a raw emotional roller coaster that I should probably avoid.

So the other day Tara from Lycia made a joke on my Facebook about fruit pies & told me I should get one & I did.  Aside from the whole weird emotional stuff, the fruit pie was actually pretty gross.  It was sickly sweet & tasted nothing like the lemon pictured on the wrapper.  It’s a food I need to leave in the fond memory department.  Nostalgia equals distortion.