Finally Checking It Out: The Moon Maid (Edgar Rice Burroughs) 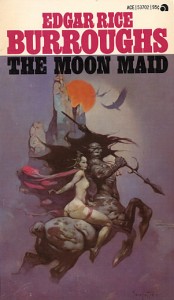 As a kid I never checked out Edgar Rice Burroughs.  Tarzan just really held no interest for me.  In 2007 my heavy metal co-worker Bruce gave me the John Carter of Mars books to read because he knew I was a fan of Robert E. Howard.  Sure the John Carter books are a little bit goofy sci-fi romance, but they are generally fun & good (I’m especially fond of A Fighting Man of Mars).  Bruce told me that he had tried to read some of the other Burroughs stuff & they generally weren’t as good, so I never really pursued anything else.

Anyway, I stumbled on The Moon Maid for a quarter at a thrift store & figured I’d give it a shot.  I can’t really explain why this book isn’t as good from a literary & word choice side from what I remember about the John Carter stuff & maybe that’s not even true.  It is essentially the same story of an earthman falling in love with an alien princess & fighting monsters & scientists, but it does have a major problem that it ends in the middle of a scene (the same thing happens in the last John Carter book actually).  The narrative starts with a guy telling a story on a train & then it ends with the train arriving & the guy not finishing the story.  I guess that gets you to buy the second book & third books & I am under the impression that this break point in the story was just for the paperback market.  I guess if I find the next one for a quarter, I’ll go ahead & grab it, but I’m not sure why as I’d probably be more satisfied re-reading A Princess of Mars.

Oh, it’s also worth mentioning that the cover art picture of the Va-ga (it’s Frazetta, but based on an older cover for the novel) doesn’t seem to fit the description of them in the book to me & that’s kind of a pet peeve of mine.

This entry was posted in books, finally checking it out and tagged book reviews, edgar rice burroughs, Finally Checking It Out, The Moon Maid. Bookmark the permalink.