Finally Checking It Out – Firestorm #1 by Gerry Conway & Pat Broderick 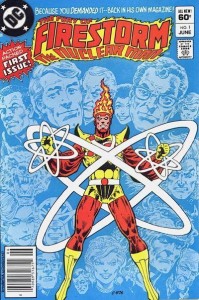 So as a kid I essentially never read DC comics.  I think I got an issue of The Flash, an issue of Crisis on Infinite Earths, & a couple issues of Who’s Who.  I’m not sure exactly why I thought DC sucked, maybe because of how goody goody things were on the Super Friends cartoon.  At any rate, I thought Marvel was cool & edgy, but DC was for babies.  There was one book that I thought had a cool look that I wanted to check out & never did & that was Firestorm.  I was talking to Jason Young about it & he said it was kinda cool & he mailed me the first issue.
Firestorm is a weird character.  First off his powers aren’t fire based as I’d expected, they’re more imagination based (like Green Lantern or Shade) & he’s “The Nuclear Man” because he’s the fusion of two dudes into one dude – one’s a scientist/professor type & the other is a high school jock – which opens up s lot of possibilities for the non-superhero bits of the book.  So while this character seems to have a lot of interesting potential to be like Shade, but at least this issue doesn’t work for me.  It doesn’t stand alone at all & is to be continued, which I guess is how comics work, but I just don’t even care to find out how the plotline ends.  & it’s my understanding that this series is the best with the character so far, but I have a hope someone else will one day take this character on & do something awesome.