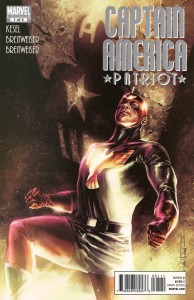 Growing up I always thought of Captain America as a goody two shoes.  I probably don’t remember the story quite right, but I remember him going into retirement because he was so racked with guilt after accidentally killing a low level agent of AIM or Hydra or something.  This was at a time when The Punisher was going around killing anything that moved in Marvel’s most popular book.  But ten years ago or so when I saw the opening of the Ultimate Avengers cartoon with Cap storming Normandy, I thought he was kind of a bad ass.  One year for my nephew’s birthday I got him a collection of the first 25 issues of The Avengers & reading those I was pretty into the para-suicidal martyr version of the character Stan Lee was doing.  Then I heard about the storyline where he got shot in the head by his hypnotized girlfriend & I kinda knew I should check out some more of his adventures.

So Captain America: Patriot is not about the Captain America Steve Rogers, but about a guy named Jeff Mace who took on the costume during the post-WWII era when Steve was frozen in a block of ice.  Mace is a reporter with 4F status so he can’t be drafted, so he decides to do his part by becoming the home front superhero The Patriot & eventually begrudgingly becomes Captain America.  I like this book a lot.  It’s more about the humanity side of being a hero than about action & fairly self-contained.  It is a good place to look for a grownup superhero comic that doesn’t rely on violence & being dark & gritty.  I hope to read more books like this.

This entry was posted in comics, finally checking it out and tagged captain america, Comic, patriot. Bookmark the permalink.

One Response to Finally Checking It Out – Captain America: Patriot by Karl Kesel & Mitch & Bettie Bretweiser