I got in the full version of the artwork for Vigilant.  Which I realize means I basically have at least four mini-comics that I haven’t run promo on yet.  I need to go ahead & see about assembling a ton of them & unleashing them on the earth.

Did some paintings for the exhibition next week.  I hope they dry in time.  I really might put the paint on a little too thick. Here’s a crappy photo of them: 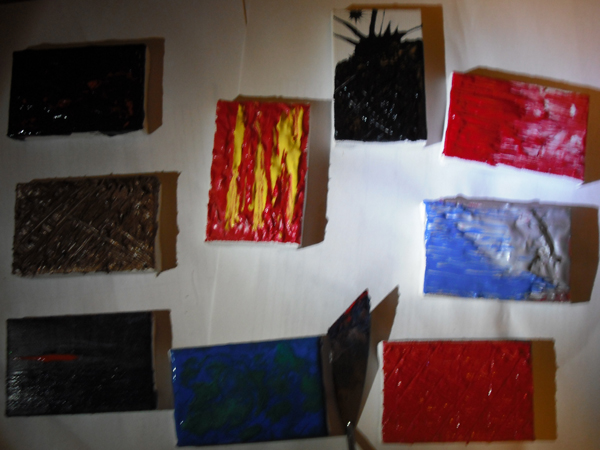 Sent in a couple Small Life Form tracks for a compilation that I did a couple weeks ago & forgot to ever submit.  I have three other comps I need to record tracks for.

Last Night’s Dreams
I go to visit my old work from a few years ago (which is something I’ve never ever done before).  One of my co-workers who went out on medical leave & never came back & everyone assumed died is there.  I tell him I thought he’d died years ago.

I’m looking for a new robot & none of them are like the ones I like.  They’re all voluptuous & sexy.  I ask the salesman for an androgynous one & he says the closest thing he’s got is the white & blue model with small breasts.